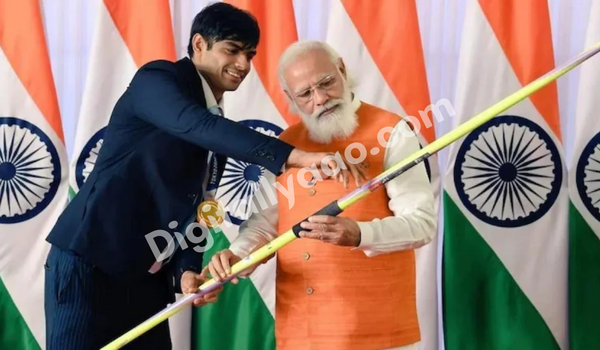 The board also helped regarding the Korana epidemic

The special thing is that in the auction that Neeraj Chopra’s spear was bought by the Board of Control for Cricket in India (BCCI) for Rs 1.5 crore. A board official gave this information on Friday. The official said, ‘BCCI had bid on Neeraj’s spear. Apart from this also bid on some other items. Namami Gange is a noble cause and the office bearers of the board felt that it is our duty towards the country being one of the premier sports organizations of the country.

The BCCI had given 51 crore rupees to the ‘PM Cares Fund’ even during the Corona epidemic. Apart from Chopra’s spear, the board also bought an angavastra signed by the Indian Paralympic contingent for Rs 1 crore. Chopra’s spear sold the most expensive in the e-auction, while Bhavani Devi’s sword was sold for Rs.1.25 crore and Paralympic champion Sumit Antil’s spear was sold for Rs.1 crore 20 thousand. Lovlina Borgohain’s boxing gloves sold for Rs 91 lakh.

This auction took place in September-October 2021. During that time many things including spears were e-auctioned, the money from which went to the ‘Namami Gange program’. A total of 1348 souvenirs were sold in that e-auction, which also had sports related items. 8600 bids were made for these. Neeraj Chopra recently donated the javelin from which he won the gold medal at the Tokyo Olympics to the Olympic Museum in Lausanne.

Neeraj Chopra is in excellent form. Last month, Neeraj Chopra won the title of Lausanne Diamond League Meet with a best throw of 89.08m. Neeraj is the first Indian player to win this title. With this title win, Neeraj also made it to the Diamond League finals to be held in Zurich on September 7 and 8. Before that Neeraj had also been successful in winning silver in the World Championship.

Did not take part in CWG Games due to injury

Neeraj had a groin injury during the World Championship match itself. After this, Neeraj Chopra was advised by the medical team to rest for four-five weeks, after which he decided to withdraw from the Commonwealth Games 2022 held in Birmingham. Neeraj went through a period of rehabilitation in Germany to recover from the injury, after which he made a bang comeback.

These 5 Aged Players Will Rock The T20 World Cup

There is now a week left for the start of the ICC T20 World Cup 2022. This T20 World Cup will start from October...
Read more
Sports

Former WWE Wrestler Sarah Lee Dies At the Age of 30