Home Sports Be Careful With These Five Players Of Pakistan
Sports

Be Careful With These Five Players Of Pakistan 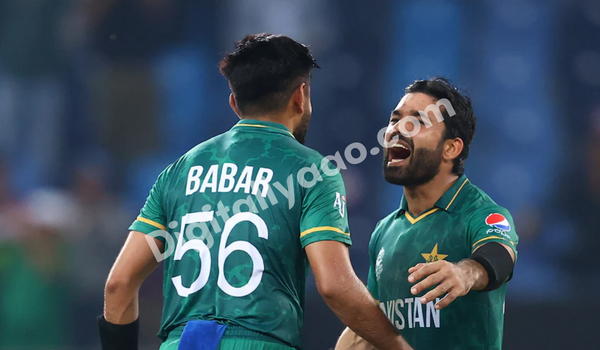 The round of Super-4 matches is going on in the Asia Cup 2022. In this episode, a blockbuster match is to be played between India and Pakistan at the Dubai International Cricket Stadium today (September 4). In the match, Rohit Sharma will be seen captaining the Indian team. On the shoulders of Babar Azam, the reins of the Pakistan team will be there.

The Indian team had defeated Pakistan by five wickets in the group-match last Sunday. Because of this, his spirits are high. Although the Pakistan team is also considered adept at counterattacking. There is no dearth of match winner players in Babar Azam’s team. Let us know about those five players who can create problems for Team India.

Be careful with these five players of Pakistan, can increase the tension of Team India

Mohammad Rizwan: Wicket-keeper batsman Mohammad Rizwan has looked in excellent touch. In the last match against India, Rizwan scored 43 runs. At the same time, against Hong Kong, this player’s bat scored an unbeaten 78. Indian bowlers will have to get Rizwan out early in today’s match so that the pressure can be created.

Mohammad Nawaz: Spin bowler Mohammad Nawaz had so far taken six wickets in the current tournament. In the match against India, Nawaz had created lines of concern in the Indian dugout by dismissing Virat Kohli and Rohit Sharma. Then in the last over, Nawaz also walked Ravindra Jadeja.

A high voltage match is to be played between India and Pakistan on the Dubai ground today. In the group-match, the Indian team defeated Pakistan by five wickets, due to which its spirits are high. Like India, there is no shortage of match winner players in the Pakistan team too. Let us know about those five players who can create problems for Team India.

Naseem Shah: Fast bowler Naseem Shah has not allowed the Pakistan team to feel the lack of Shaheen Afridi at all. On his T20 debut against India, Naseem had bowled KL Rahul in the very first over. Later Naseem also made Surya walk. Then against Hong Kong too, Naseem had given his team initial successes by taking two wickets.

Babar Azam: Pakistani captain Babar Azam has not been able to do anything special in the Asia Cup so far. Babar went on to score 10 runs in the match against India. At the same time, 9 runs came off his bat against Hong Kong. Babar may not be looking in form, but taking him lightly can be heavy for the Indian team.

Khushdil Shah: In the match against Hong Kong, Khushdil Shah showed that he is capable of batting in the last over. In that match, Khushdil scored 35 runs in just 15 balls. Khushdil would also like to show a good game with the bat against India.

These 5 Aged Players Will Rock The T20 World Cup

There is now a week left for the start of the ICC T20 World Cup 2022. This T20 World Cup will start from October...
Read more
Sports

Former WWE Wrestler Sarah Lee Dies At the Age of 30