Rajinikanth honored R Madhavan after the success of Rocketry movie 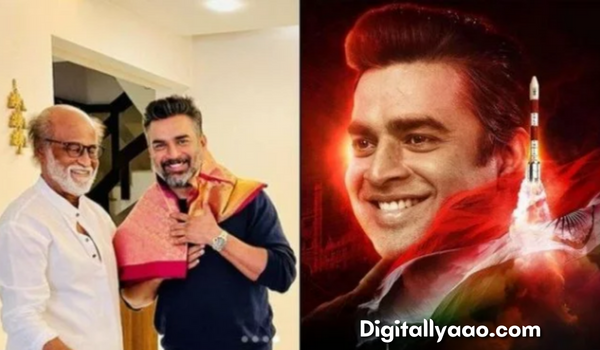 Entairtenmaint: As you must be aware that R Madhavan’s film Rocketry was released a few days back. And this film made a splash as soon as it was released. This movie was based on a true incident. And after its immense success, the famous actor of South Industry, Rajinikanth met R Madhavan and also gave him some gifts.

R Madhavan has shared videos and pictures on social media. In the first video, Rajinikanth puts on a shawl for Madhavan, after which Madhavan touches Rajinikanth’s feet. In the second video, Rajinikanth is seen wearing a shawl to Nambi Narayan. After this, two beautiful pictures of the occasion have also been shown, which are now going viral on social media. Fans are expressing their love by commenting on this post.

R Madhavan has given a beautiful caption with this post, in which he has thanked Rajinikanth. He wrote, ‘When you are blessed with another legend in front of the one-man industry and the legend himself. It is a moment marked for eternity. Thank you Rajinikanth sir for your kind words and love. This inspiration has completely refreshed us. We love you like the whole world.’

The film Rocketry: The Nambi Effect’ is based on the story of Nambi Narayanan, a space scientist arrested on false charges of espionage. The film depicts the achievements of Nambi Narayanan before the interval and his contribution to space science. At the same time, the battle of atrocities and injustice meted out to them after the interval is shown. Made on a budget of 20 crores, this film has done more than 40 crores in business. The film has also appeared on the OTT platform Amazon Prime.

Read Also: Rajkummar Rao bought a luxurious house in Mumbai, you will be blown away knowing the price.

Share
Facebook
Twitter
Pinterest
WhatsApp
Previous articleRajkummar Rao bought a luxurious house in Mumbai, you will be blown away knowing the price.
Next articleSushila won silver and Harjinder Kaur won bronze on the fourth day